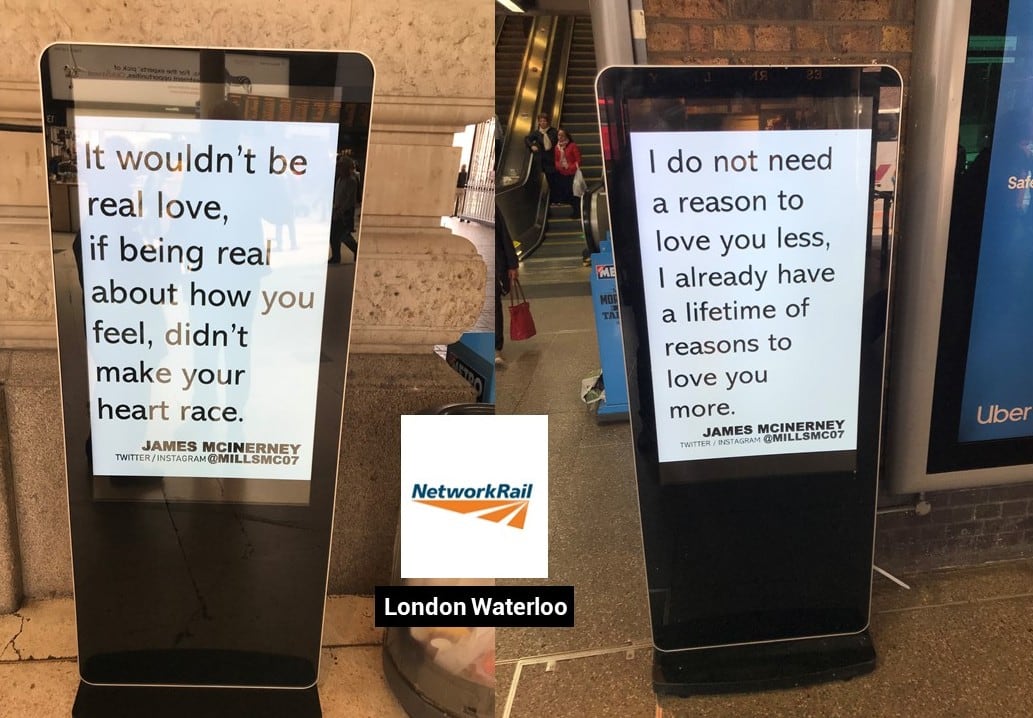 The Poetry Project pops up at Mermaid Quay

Poetry is to be seen on posters around Mermaid Quay as part of an international Poetry Project which aims to both get poetry into places you wouldn’t normally see it and to raise awareness of mental health in order to help those who are suffering.

The poems have all been written by poet, author and photographer James McInerney.  They will be on display in Mermaid Quay from Monday 9th September to Monday 7th October.

James has been running the project since December 2008.  He was originally inspired by the service information boards on the London Underground that occasionally display quotes from famous authors, but never poetry.  Initially approaching one station to see if they would display his work and being pleasantly surprised to receive a positive response, the project eventually ran over multiple stations over the Christmas period with staff at Covent Garden, Leicester Square, Wembley, Paddington, Piccadilly Circus, Willesden and various others all sharing James’ poems on their service information boards.  The Poetry Project is now also being run daily at London Stansted Airport, London Bridge and Waterloo stations and has also appeared at Charing Cross, Manchester Piccadilly and Glasgow Central stations. The project has gone from strength to strength and is now appearing in shopping centres, parks and schools across the UK as well as two malls in Australia.

#poetryinpublic is just part of The Poetry Project, which also aims to use poetry to raise awareness of mental health to show those who are currently suffering that they are not alone.

James says
“There are many taboo subjects that people are scared to approach but we have to talk about them, it is healing. I use poetry as the voice. I suffered depression and poetry saved me, it is an amazing outlet. With the help of some amazingly talented actors, actresses, voiceover and YouTube artists from all over the world the project is proving that the spoken word can be a very powerful thing indeed and its versatility can open people’s eyes and make them see how emotion can be portrayed in such a beautiful way with poetry at its core.”

You can find out more about The Poetry Project and James’ work here:  https://Jamesmcinerney.wixsite.com